When Apple announced the Fusion Drive, I assumed it was just a hybrid SSD drive. However, after consulting the internet tubes, I discovered a consensus that no one really knew what the heck it was. We had to wait.

Then the reviewers got hold of it, and lo and behold, it turns out to be separate SSD and standard drives combined with Core Storage. Neat. 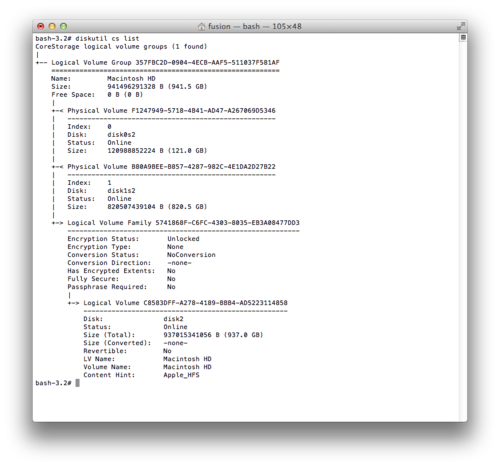 The question remained about how Boot Camp is supported on the Fusion drive. Apple’s support document said that you can create two partitions AND THAT IS ALL YOU GET, SO GOOD DAY SIR.

At the Apple store I had to special order a Mac Mini with the Fusion Drive. Once it arrived, I looked at the Fusion Drive in Disk Utility and it displayed as a single drive and partition: 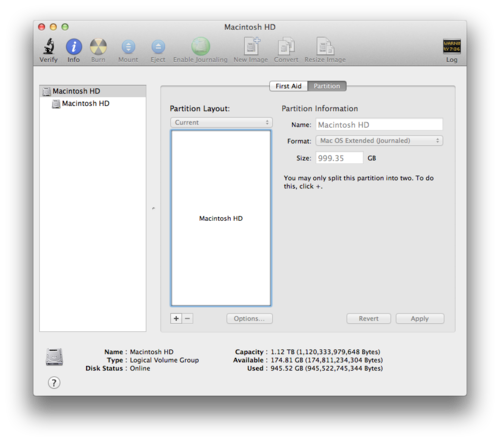 The terminal shot of the core storage view above shows the different drives. The technology behind core storage has been well-covered in the blogosphere, but a question remained: how does Disk Utility handle repartitioning the drive and how does it appear in Windows?

So I created a new partition in Disk Utility, and sure enough Disk Utility only allowed creation of one additional partition, which could be either HFS+ or FAT32/exFAT. No third partition can be created.

I then used Winclone to restore a Windows image to the FAT32 partition I created in Disk Utility, booted it up and it worked great! From the Disk Management utility in Windows 7, the disk looks like this: 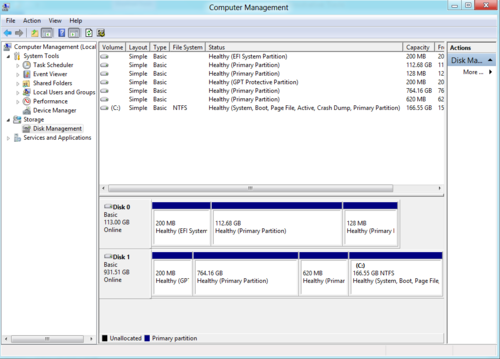 As expected, Windows sees it as two separate drives. Back in OS X, I checked out the GUID partition table: 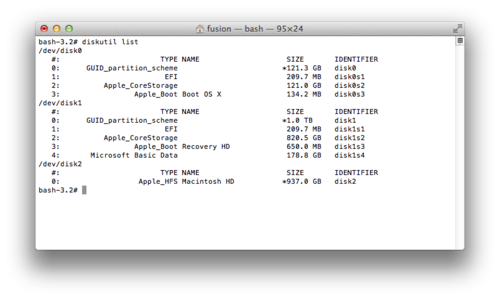 Some interesting things here. As you would expect, there is a Core Storage partition on both the SSD drive and the standard drive. Both have a GUID partition scheme and an EFI partition, as expected. However, the SSD has its own Apple_Boot partition. It could be that the Apple_Boot is the OS X System installed on the SSD, but it looked more like the partition to boot into a File Vault 2 volume. A closer look at the mounted partition showed only the basic system files needed by core storage. Similar, if not identical, to File Vault 2.

The Windows partition and a recovery partition exist entirely on the standard drive. As expected, since OS X requires Boot Camp to be last among the first 4 partitions on the drive, the Windows volume is partition 4.

Note that this drive is 1 TB in size. As of this writing, Boot Camp only supports drives up to 2.2 TB in size. Next I’ll be posting an article about how to get Windows installed on a 3 TB or larger drive. This will apply to both Fusion and standard hard drives.