We have been working hard to get Winclone updated to work with the recent MacBook Air, iMac, and MacBook Pro EFI with Windows 8 natively in EFI. It turns out that the new hardware not only supports Windows booting in EFI mode, but also installs that way by default when using bootcamp assistant. When you install Windows 8.1 using the magic thumb drive method, you end up installing Windows in native EFI mode. We are very excited about this development, since it will theoretically allow external booting, multiple Windows partitions, and much faster boot times.

It requires some modifications to Winclone, though. No longer is the top level boot folder used, but rather the boot files are in the EFI partition. Remember that crazy EFI partition that was empty? Well, it now has stuff in it: 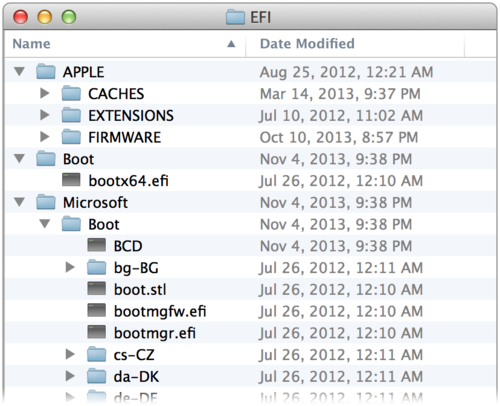 We are updating Winclone so that you can clone, migrate, and restore bootcamp partitions on older macs to new macs and back, and it will boot based on the version of Windows and the availability of Windows EFI booting on that Mac. For example, if you have an older MacBook Air and you migrate it to a new MacBook Pro, and it is Windows 8, it will boot natively via EFI.

We’ll be doing more testing on external drives and multiple Windows partitions, and posting some in-depth details, but it should give a lot more flexibility. We are also updating Boot Runner so that it works great with multiple partitions and external drives.