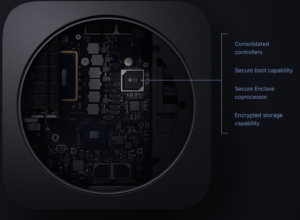 While investigating support for Winclone for the amazing new T2 Macs (including the new 2018 MacBook Air and 2018 Mac mini), I discovered that the way Boot Camp Assistant installs Windows has changed a bit.

The Old Way (prior to T2 Macs)

There are some other things that Boot Camp assistant does, but those are the important parts.

The new T2 macs modify this process in a pretty significant way. The WindowsSupport no longer contains the AutoUnattend.xml file to point to the drivers, and instead injects the drivers directly into boot.wim file. This requires Boot Camp Assistant to understand the internals of WIM in order to inject the driver (which is normally done by the Microsoft DISM tool). In fact, in the BootCamp\Drivers\Apple folder, there is a new file called BCWim.bin. Opening it with HexFiend shows a new signature for the file: APWIM. I assume this means Apple WIM format. A Windows WIM file has the file signature of MSWIM:

I suspect that Apple moved to injecting the drivers to the boot.wim so that the drivers are available earlier in the boot process. Windows needs these drivers for the SSD for initial boot.

A better solution is to add in an AutoUnattend.xml back in:

The drivers will load correctly (except for IntelMEI, which can be removed from the drivers folder).

Read all about the process in the updated Create a Windows 10 Bootable USB Flash Drive on a Mac article.

The new T2 Macs also support WinPE and MDT with Winclone 7 Pro, so if you are deploying Macs with Boot Camp, check out Winclone Pro.

If you just bought a new MacBook Air or Mac Mini, Winclone 7 is a great way to migrate and backup your Boot Camp partition.