Winclone images can be created in two sources. Windows can be installed on a Boot Camp partition and then all the Applications/Programs installed and configured. The second method is to start with an image that is generated from the Windows install media. Either method allows for customization during restore and first boot.

The Gold Master option involves installing Windows on a Boot Camp partition, and then running SysPrep as the final step. This forces Windows to scan for changes in hardware and install drivers as needed. It also allows for first boot customization. For more information on running SysPrep, see this article.

After the ISO has been downloaded, mount the ISO by double clicking it in the Finder. The ISO will mount and appear on the Desktop. Open the ISO and look in the Sources folder for a file named “install.wim”. 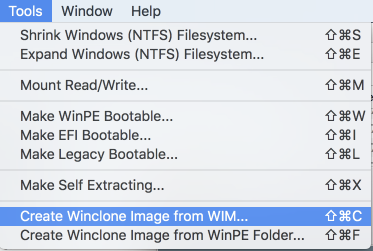 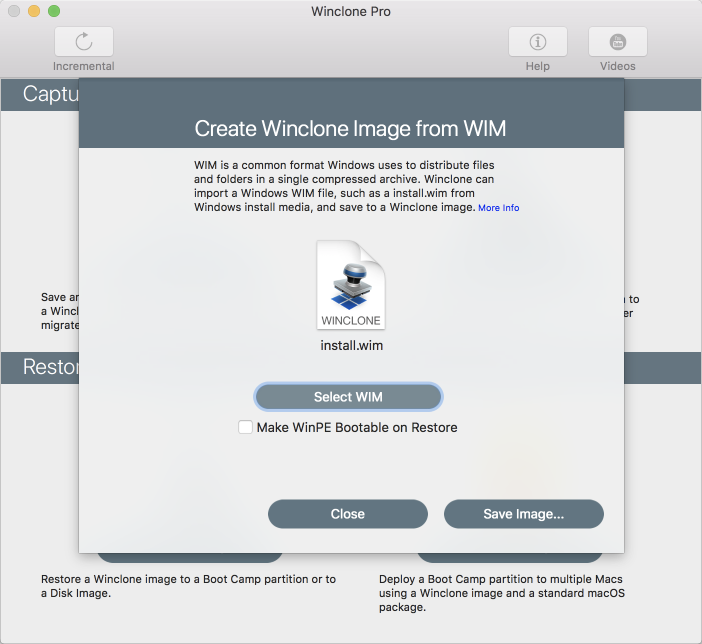 In the “Create Winclone Image from WIM” sheet, click the Select WIM button and select the “install.wim” file from the sources folder on the Windows 10 mounted ISO. Leave the “Make WinPE Bootable on Restore” option deselected, and click Save Image. Give the image a name and click Save. The Winclone image now contains the WIM file and will use it when restoring to a Boot Camp partition.

You can create a Winclone Package to easily deploy this image to multiple machines. To do this, select Create Package from the Winclone 7 main window. 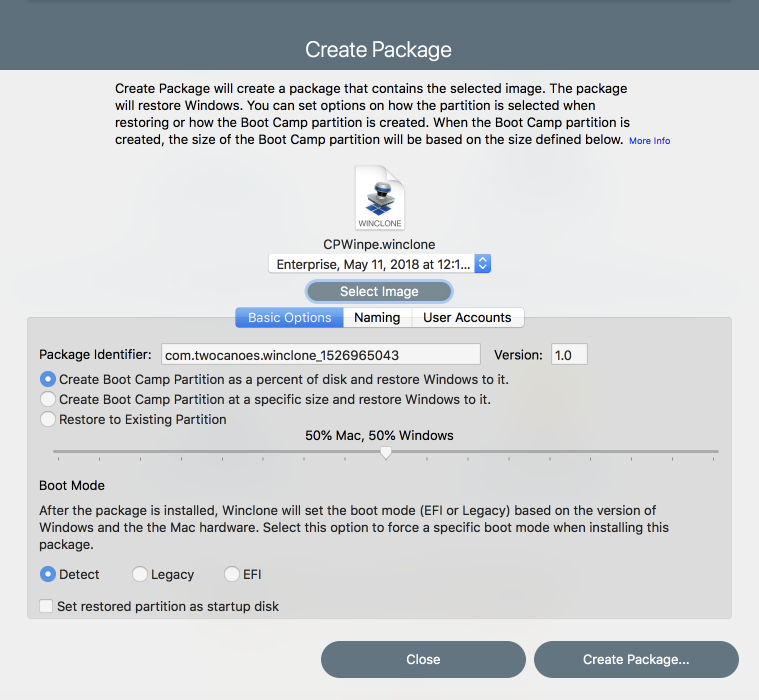 In the Create Package sheet, select the Winclone image you created. Click the Select Image button and select the image. If there are multiple Windows editions inside an imported WIM, select the correct edition using the popup menu.

Under Basic Options, select the options for creating or restoring to a Boot Camp partition. 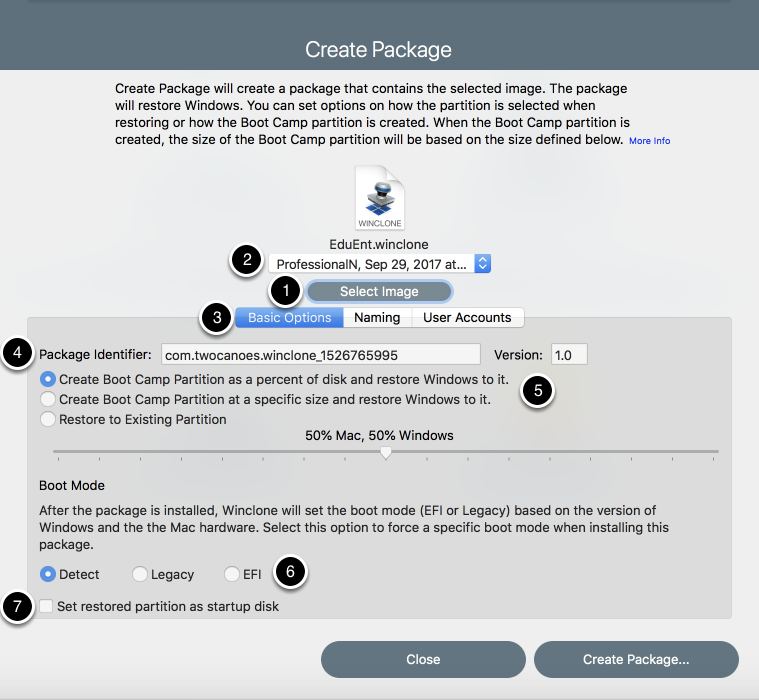 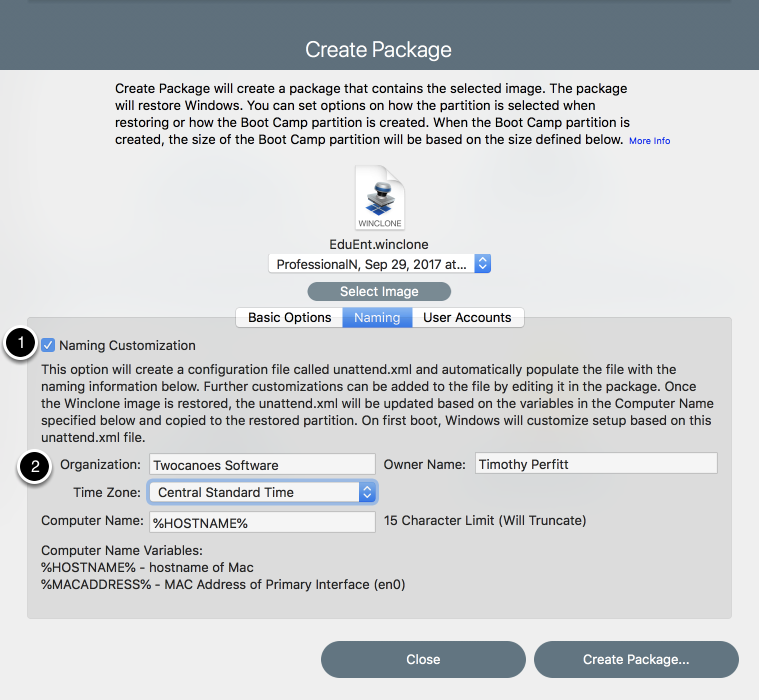 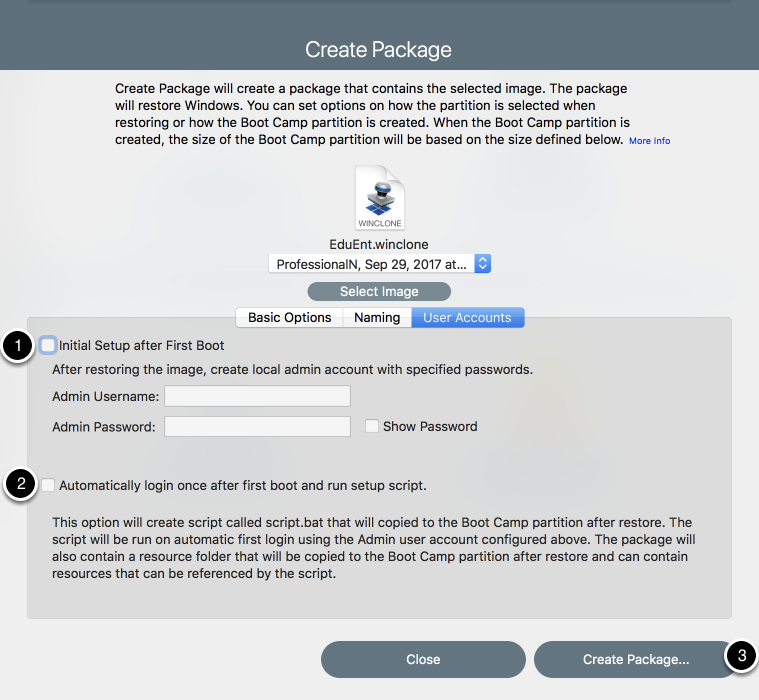 When the Create Package… button is pressed, a standard Save dialog will appear to give the package a name and save location. After saving, an option to show the Sysprep folder allows further customizations of the first login script and resources copied to Windows. 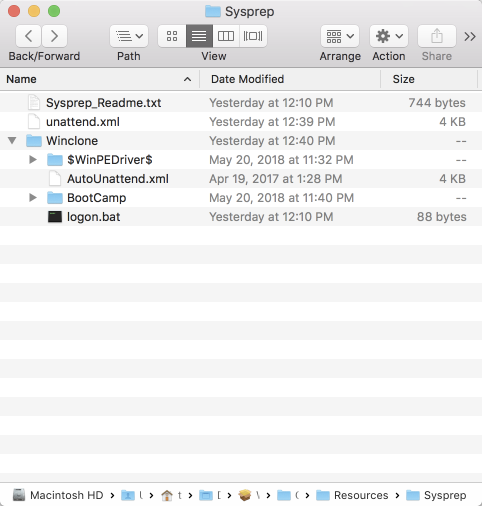 To add in additional resources to the restored image, copy them to the Winclone folder in the Sysprep folder. Any files in the Winclone folder will be copied to the root of the restored image (c:). A logon.bat file will also be created and automatically run after Windows is set up. Logon.bat is run by logging into the user account defined in the package settings and running the script. Add any additional software to install and add the commands to install the software to the logon.bat script. Some sample commands are included in the logon.bat, including installation of Windows Boot Camp drivers. The installation of Boot Camp drivers assumes that all the files and folders from the Windows Support Software have been copied to the Winclone folder (as shown above). 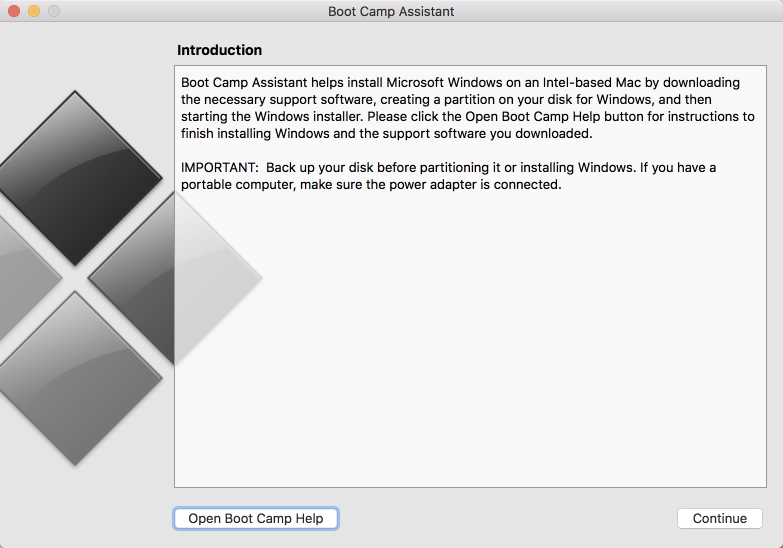 The package is now a standard macOS installer package that will create a Boot Camp partition (if needed), restore the WinPE files to the partition and then set it to boot into Windows correctly.