This article covers the process of creating a macOS installer package of a Winclone image and deploying the package with the JAMF Pro.

In this article, we cover:

Boot back into macOS, not Windows. If you boot into Windows, the setup process will start and you’ll need to re-create the boot camp partition. Once in macOS, you’ll use Winclone Pro to capture the image and create a package.

Now that the image is created, use Winclone Pro to create a package that JAMF Pro will deploy. The package can create a boot camp partition and deploy the package. Follow the steps in this article to create the package:

On one of the target Macs, copy the Winclone package to the desktop and double-click on the package. Install the package and validate that the Boot Camp partition was created successfully (if that option was selected when creating the package); check that Windows was restored successfully. Then, verify Windows first run scripts and setup ran correctly.

The package you created is now ready to be deployed. Follow these steps to add to Casper Admin:

You can now deploy this configuration as you would any other Casper configuration. For example, if you are restoring via Target Disk mode in Casper Imaging, it would look this this: 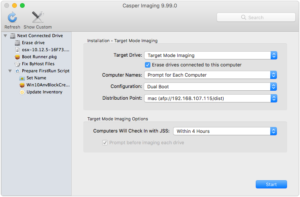 Note that order of operations for the workflow:

If there are any errors, this article covers troubleshooting package based installs.

To get an idea of timing, we deployed a basic macOS .dmg (created with AutoDMG) and a 8 GB Windows 10 image using target disk mode: