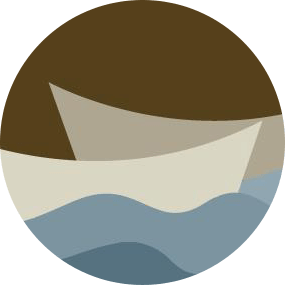 Greetings! We’ve had a busy fall season at Twocanoes Labs! Our latest entry in the world of beacons is the Bleu Station 200 Series, featuring a new design and new features. There is now a LED visual indicator showing the beacon’s status in setup, test or active mode. We’ve also added a reset button, particularly useful when setting up or repurposing beacons.

Bleu Station Series 200 also includes over-the-air firmware update capability, future-proofing as new features are developed. If you are a developer, our SDK includes code for adding firmware updates to your own apps.

Like the Series 100, the Bleu Station 200 Series maintains compliance with Apple’s iBeacon standard, so it can be used with any iBeacon-compatible apps, including our Bleu Setup for iOS, Geohopper, Bleu Meetings and Bleu JSS. 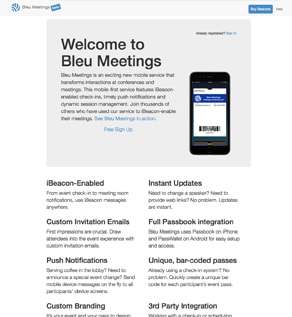 Last week we unveiled the beta version of Bleu Meetings, a web service for delivering meeting invitations, passes, mobile notifications and beacon-aware event locations. We were fortunate to field test Bleu Meetings at two large conference events this summer and the response from organizers and participants was uniformly positive (check out the AFP548.com podcast from the Penn State Mac Admins Conference). If you organize small gatherings or large events, Bleu Meetings is for you.

Watch our Quick Setup video to see how Sarah used a Geohopper Beacon and Bleu Meetings to check in participants at her Book Lover’s club meeting.

Managing Printers with iBeacons from Twocanoes Software & Labs on Vimeo.

The practical applications for location-based policies are virtually limitless. Here’s one example where we make available a color printer to managed devices that are nearby. 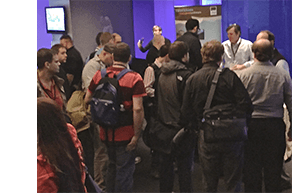 We were privileged to be a sponsor and vendor at JAMF’s JNUC 2014 in Minneapolis last month. We got the chance to talk with some great folks doing great things. We also had the chance to get the new Bleu Station beacon into customers’ hands and hear about how they plan to incorporate beacons into their managed environments. It was a fantastic experience and a lot of fun. Thanks JAMF!