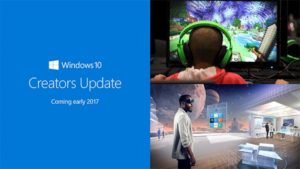 Windows is going through a pretty major shift.  Using the same computer at work and at home drove Windows adoption over the past 2 decades.  Microsoft dominated the office computer and drove adoption when people went to look for a home computer.  Mobile fundamentally changed this landscape, introducing the  “bring your own device” to workplace, where people brought their iPhones to the office and forced IT to accommodate them.  Windows 10 Creators Update puts Microsoft firmly on this same path by putting the user as the focus rather than the device.

One of our customers while I was at Apple told me a great story about how the had entered a new era.  New iPhones were connecting to their Microsoft Exchange server so they set up a new policy.  They would wipe any iPhone that was connecting to their Microsoft Exchange Server once a month.  However, it didn’t discourage people from using their iPhones.  People set up their iPhones from scratch once a month and then reconnected to the Exchange Server.  A new era had arrived.

Apple also introduced the App Store.  While it is a convenient way to install software (and arguably more secure), it also had a very fundamental change. Software is licensed by user rather than by device.  You can see this when you  download an app from the iOS App Store or the Mac App Store. All software is tied to a specific user rather than to a device.  It shows that the focus is no longer on “who owns the machine” but rather who is running the software.  And that brings us to the Windows 10 Creators Update.

Companies traditionally bought the computer, the operating system, and installed all the software on the work computer.  Software licensing was done based on the total number of computers using the software.  Anyone using that computer could use the software that is installed on that computer.  On the Mac, if you imaged the machine and restored it on a different computer, you had to re-authenticate to the Mac App Store to use these apps.  This is true lately with apps from the Microsoft Store, but there are 2 interesting changes in Creators Update that show a fundamental shift. 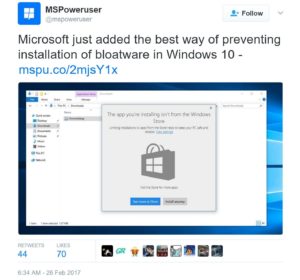 This shift has been going on for a while.  The Mac introduced the ability to required signed or App Store Apps a while ago.  The shift is that the computer is no longer the focus of management and software licensing, but rather the person using the computer.  Mobility (namely the iPhone) made computing intensely personal.  Rather, the user is now is the focus rather than the computer.  The Windows 10 Creators Update shows that Microsoft is moving quickly in that direction as well, paving the way for the new era where you bring your own device and IT provides the services (and security policies).  Users install software from the App Store and the OS applies any patches or OS updates automatically.

Microsoft is also moving to a Windows as a service.  So the model is clear: software and the OS are increasingly tied to the person rather than to the device.  Get a new laptop?  Sign in to your personal account and get the most recent version of software and OS.  Data is in the cloud.  The iPhone brought this model to the forefront, and the Windows 10 Creators Update making it very clear that Microsoft is heading in this direction as well.