With the release of 10.8.3, Apple has provided support for Boot Camp on 3 TB or larger drives. This is important because 3 TB drives are now becoming more common. They are still a build-to-order option on the iMac, and until the 10.8.3 update, it was not possible to use Boot Camp assistant on 3 TB (or larger) drives. While it was still possible to set up the partitions so that you could install Windows and still use all of the available space, you still either had to pave and rebuild the partitions or be happy with two Mac volumes and a Boot Camp volume. The 10.8.3 update provides support for Boot Camp on 3 TB or larger drives by combining the 2 Mac partitions into a single Mac volume, and making sure the Windows partition is within the first 2.2 TB (allowing it to boot using the legacy MBR boot dance).

In Apple’s own words (from the man page on diskutil):

CoreStorage maintains a world of virtual disks, somewhat like RAID, in which one can easily add or remove imported backing store disks, as well as exported usable volumes, to or from a pool (or several pools). 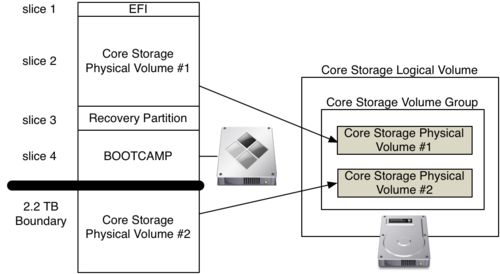 Core Storage to the rescue!

One of the solutions to this issue is to create five partitions:

As long as Windows is within the first 2.2 TB, Windows will boot fine. Mac Partition #1 and Mac Partition #2 will boot as well, as long as they have OS X on them. However, people would rather have a single Mac partition rather than 2 separate partitions. You can use Core Storage to combine the 2 Mac partitions, but prior to 10.8.3, you had to backup all the data, create the Core Storage Volume and then restore all the data. With 10.8.3, OS X is now able to create Core Storage volumes on a live OS, as well as add create Core Storage Groups and add physical volumes to them. So ultimately, that is what happens with the new Boot Camp Assistant in 10.8.3.

If you install a 3 TB drive yourself and it did not come with your Mac, it won’t have any Core Storage Volumes (in fact, it probably won’t even be GPT). If you use the OS X installer and create a partition using Disk Utility, you’ll have a GPT formatted disk with a single Mac partition that will look like this: 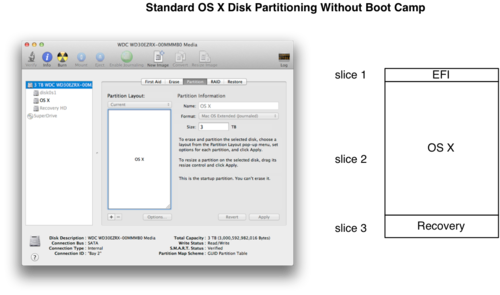 Converting a GPT partition to a Core Storage Volume

To convert a GPT partition to be a Core Storage Volume, use command line utility “diskutil”:

This will add the physical partition to new Core Storage Group, and then add that group to a Core Storage Volume, and mount the volume. The volume you see mounted on the desktop will look the same, but it is now part of Core Storage. Opening Boot Camp Assistant, you’ll see that it now recognizes it and can create a Boot Camp partition: 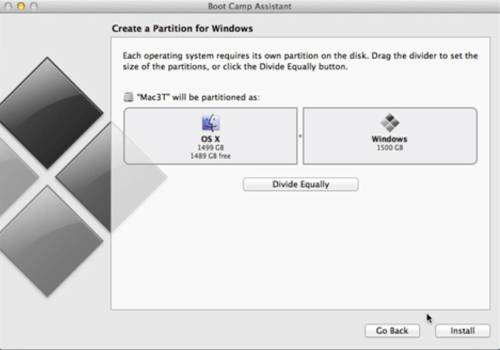 After Boot Camp Assistant runs, there will be a single Core Storage Volume made up of one Core Storage Groups, and that Core Storage group has 2 physical volumes. The actual partition table is exactly like we had before when working around the issue with two Mac partitions:

But now with Core Storage, the two Mac volumes are combined together:

Note a couple of things:

You can now go forth and install Windows or restore a Winclone image.

In order to support booting Windows on OS X with drives larger than 2.2 TB, Apple had to support EFI booting, allowing the Windows partition to boot from any partition of the first 4, or split up the Mac volumes and then combine them with Core Storage. By choosing the option of splitting up the Mac volumes, it allowed them to support most all of the versions of Windows 7 and Windows 8. You are still limited to 2.2 TB for the Windows volume, but that is still a tremendous amount of space.

I shot a quick screencast showing the process of converting the 3 TB drive to Core Storage and probing the partition table.