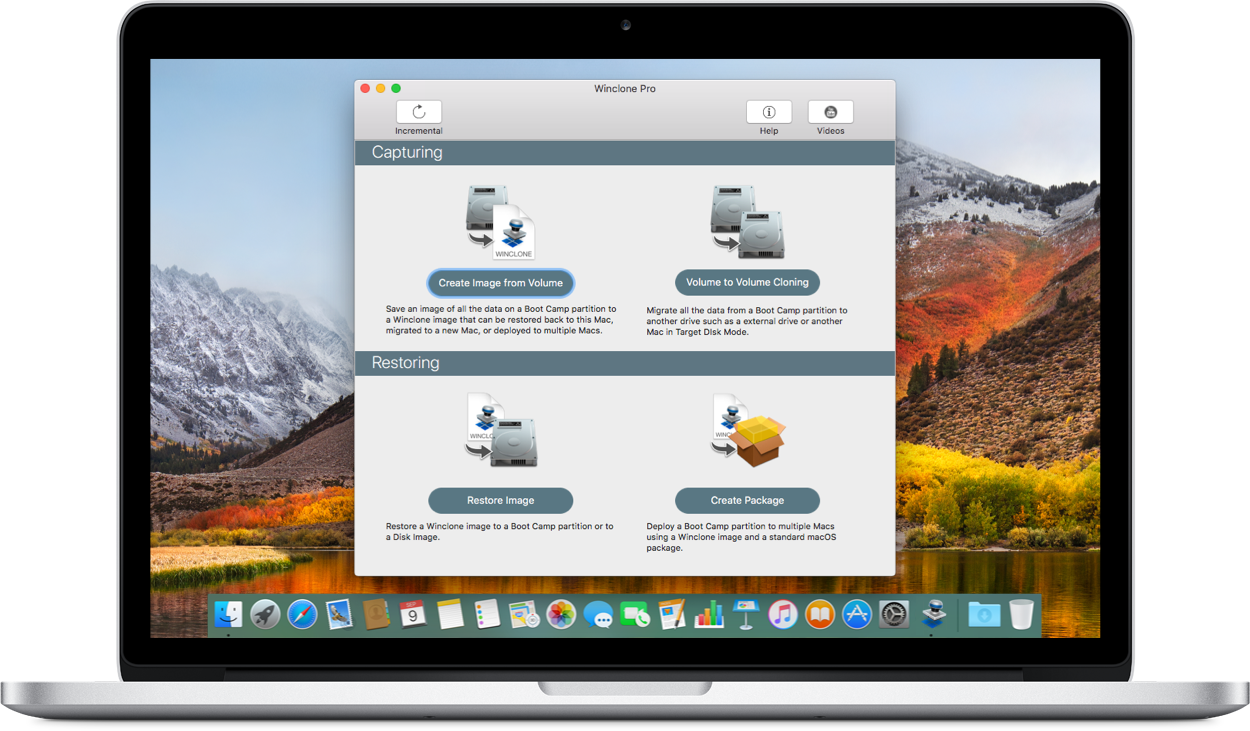 Today we released Winclone 7, and it is the most ambitious release yet. Winclone images, migrates, and restores Boot Camp partitions on the Mac, both for consumers and for mass deployment in enterprise environments.

Winclone 7 introduces two new features that have long been a requested for Winclone and I am quite proud that we finally got them accomplished. The two features are incremental imaging and imaging Boot Camp via SCCM. Nearly since Winclone was released, we have had people asking about these two features and I loved the idea, but the implementation turned out to be tricky.

Incremental imaging became a possibility when we switched to file-based Windows Imaging Format (WIM). The switch to WIM was driven by a couple of reasons: future flexibility with Windows imaging and 512 to 4k physical block size. WIM is interesting in its internals. Each WIM file can contain multiple images (stored by index), and no file is duplicated across the entire WIM. This was primarily for distributing many editions of Windows in a single WIM file. If you consider Windows 10 Enterprise versus Windows 10 Education, the majority of files would be the same. A single WIM can contain multiple editions of Windows to be installed, but have about the same size. 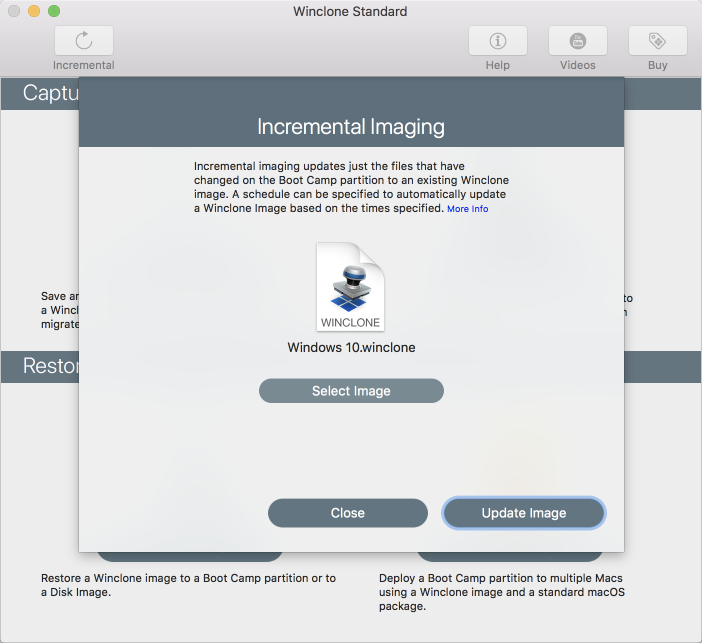 WIM files can also be booted from, and store a bootable version of Windows. So Winclone leverages both, but for incremental imaging, Winclone does a backup of a volume that is already in the WIM, but only the files that have changed are added to the WIM. But here is the neat part: Each index can contains a reference to all the files rather than just the ones that have changed. On restore, you select the index of the imaging that you want in Winclone, and all the correct files are restored. 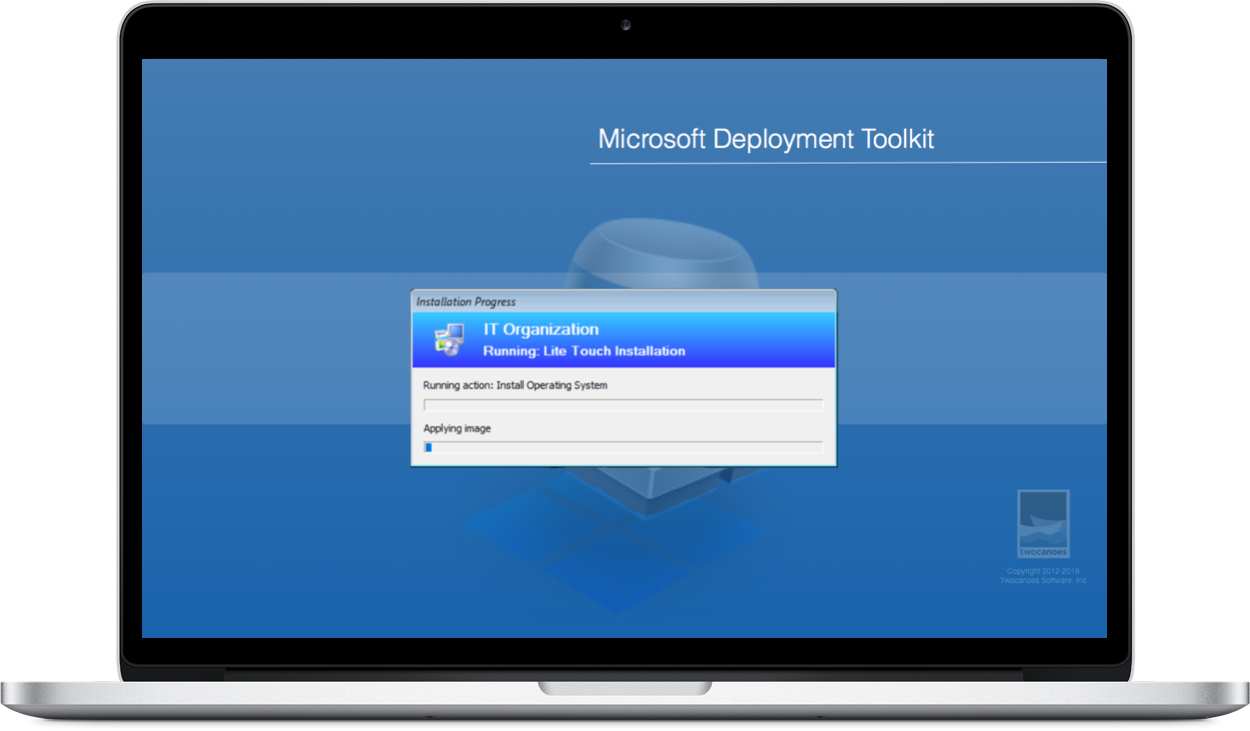 WinPE has been a feature long requested for Winclone, and we have been trying different ways to implement it. I have worked with folks at lots of different organizations and schools, and we have gotten WinPE environments booting on the Mac. However, we had a couple of stumbling blocks: Windows had to be booted in memory so that the partition could be written to. Many admins have been booting WinPE from a USB Flash drive and imaging from SCCM / MDT, but booting either from the network or from a partition would be much preferable to inserting a USB drive in all machines.

It all came together in the last few months thanks to some amazing folks at Cal Poly San Luis Obispo. They were looking for 2 features to make their deployment of dual boot Macs easier: Automatic naming of Windows at first boot (for stand alone imaging), and booting WinPE and imaging (via SCCM). We spent a few weeks exchanging emails and then I took a trip out to San Luis Obispo for some intensive discussion and testing. I learned a ton about their environment, SCCM, MDT, and WinPE.

Winclone 7 now incorporates all those features. Winclone can craft a custom BCD for booting WinPE from memory that was installed on a partition on the boot partition. Once in the WinPE environment, the boot partition can be imaged or reformatted, leaving the Mac partition alone. Winclone 7 also can deploy the WinPE partition as a package, so admins can push out a Winclone package that creates a new partition, restores WinPE to it, sets it bootable, and on next boot, boots WinPE in memory. The partition can then be imaging from Task Sequences in MDT / SCCM. 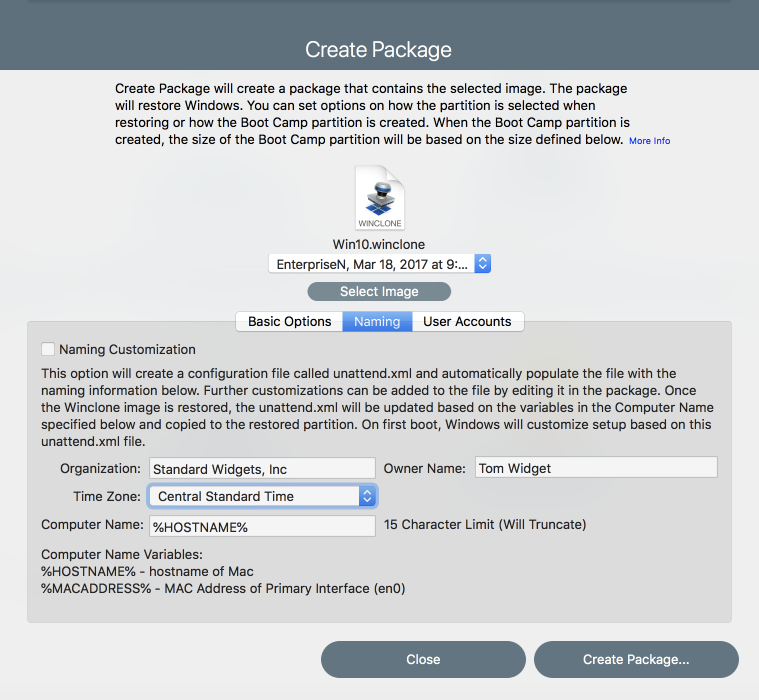 Since Windows 7 uses WIM as the internal format, we also added in the ability to import a WIM from a file rather than files on a Windows partition. The base system on Windows 10 install media is in a file called Install.wim. This file contains a bootable version of Windows that has never been booted and is in a state that allows it to be customized on first boot (like running sysprep on a Windows install).

Winclone 7 now has the ability to import this Install.wim and start with a never-before booted version of Windows. Boot Camp drivers can be injected into this wim file, and when the wim is installed, can be further customized with settings, scripts, applications, services, and additional drivers.

We exposed some of these common settings, such as computer naming, admin account creation and a few more. Admins who are experienced with Windows first run setups can further customized the setup file (called Unattend.xml) and Winclone will install the settings on restore.

Winclone 7 introduces a new way to buy Winclone Pro: Winclone 7 Pro Enterprise. Winclone 7 Pro Enterprise has subscription pricing and enterprise integration support. For $5 per mac per month (paid 1 year in advance), you can cover all your Boot Camp Macs and get assistance with WinPE booting, script customization, and more. From my conversations with customers who have a larger number of dual boot macs, this pricing makes the most sense for them. We are still keeping the Winclone Pro perpetual licensing for organizations with a smaller number of dual boot macs or who do not need to customized support, as well as for consultants and repair shops.

Check out the product page for Winclone and Winclone Pro, and some in-depth articles on setting up imaging with SCCM/MDT:

If you deploy dual boot macs and want to discuss further, let’s talk.